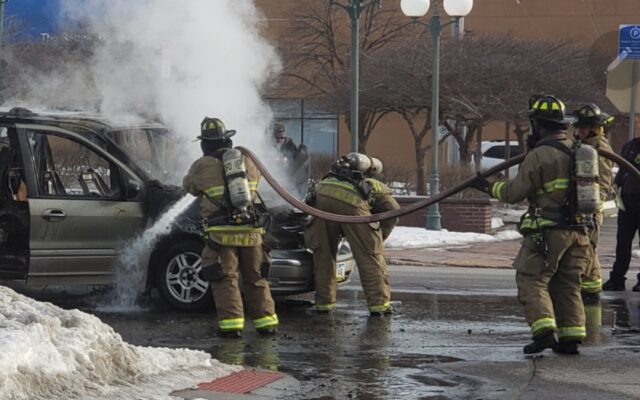 At around 3:30 pm, a call came in over the Webster County Scanner that a vehicle

was on fire in downtown Fort Dodge. The Fort Dodge Fire Department was called to a van that was smoking and on fire in the middle of 1st Ave North off of North 9th Street.

On the scene, Alpha Media spoke with the owner of the van who said it just started smoking and she and another adult hurried to get the children that were inside out safely.

Initial reports state that no one was injured, but the van appeared to be a total loss.

Just a half hour before, volunteer fire crews from Boxholm and Pilot Mound were on the scene of a house fire in Boxholm. On the scene responders saw flames going through the roof on the east end of the house and immediately requested help from the Dayton and Ogden Fire Departments.

Dayton Fire Chief, Luke Hainzinger said getting the fire under control was a team effort by several volunteer fire departments.

“We checked in with Pilot’s incident command or Boxholm and just everybody works together really good,” Hainzinger said the volunteer firefighters are crucial in these communities that are far away from paid emergency crews.

“You’d be waiting on a full time department. That’s a long time for those guys to get down there sometimes. Yesterday’s fire was paged at roughly 3 o’clock on a Tuesday. Everybody that was there left work or everybody left what they were doing to come do that.”

Hainzinger said all of the residents made it out of the home safely and first responders all left the scene at about 7:00 pm.

An area business, Burt’s Dog House, is asking friends and neighbors to help with donations of clothing, household items and kindness during this time.

Fires like the one in Boxholm are a firm reminder of how volunteer agencies rely on their friends and neighbors to be the heroes in their communities. Hainzinger said there is a big need for volunteers to step up in Dayton and in the smaller communities across the country.

“We’re 100% volunteer. We’ve had a few younger join but that’s really our issue to get the younger blood in and transfer that knowledge. It’s hard everywhere for any volunteer service all around the country to get people to join,” Hainzinger said.

If you think you could make a difference as a volunteer firefighter in Dayton you can contact the fire chief at 515-547-2680 or on their Facebook page.