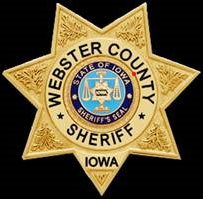 An inmate who escaped the Webster County Jail Saturday night is back in custody, along with a woman who allegedly helped. Jailers called the Webster County Telecommunications around 10:55. Investigators discovered a male inmate had propped a third story exit door open before exiting out and using sheeting to climb down into the alley. A police canvas of the immediate area was conducted and the male’s county inmate clothing was located. A K9 track was done but the male’s scent was lost near the intersection of South 8th Street and 1st Avenue South. Through further investigation and utilization of city street cameras it was learned that the male was likely in a silver Chevrolet Impala. Several addresses previously associated with the male were then checked within Webster County. At approximately 1:12AM the above vehicle was located in Otho and a traffic stop was initiated by a Webster County Deputy. The vehicle came to a stop before driving off in an attempt to elude deputies.

Officers with the Fort Dodge Police Department assisted in the pursuit and were able to deploy stop sticks near the intersection of 219th Street and Quail Ave, striking one of the vehicle’s tires. A slow speed pursuit then traveled through Fort Dodge before the vehicle became disabled in the 100 block of South 14th Street.