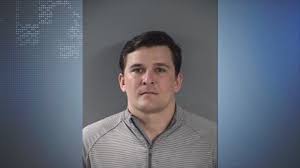 A former Iowa State Football player is facing charges, after he allegedly assaulted a current Iowa Basketball player. 29 year old , Nicholas Kron is a former Cyclone D-End that now has a listed address of Nashville, Tennessee. He has been charged following an alleged attack on Iowa Guard Jordan Bohannon, that took place earlier this year.

Criminal complaints, say Kron punched Bohannon in the back of the head multiple times. The incident happened outside of an Iowa City bar in May. Bohannon was later taken to the hospital to be treated for a head injury.

Kron turned himself just days after Bohannon filed a lawsuit against him. Kron is charged with assault causing bodily injury following the alleged attack. The University Of Iowa Athletic Dept., thus far has declined comment, saying that the incident has no connection to the university.

Local Events Calendar
Connect With Us Listen To Us On