A former NFL QB was in the area on Wednesday visiting a high school football team. Iowa Native Kyle Orton who played for 5 different NFL teams was at Manson NW Webster’s practice. Orton was a guest of Cougar Head Coach Marty Hart. Orton spent time as expected teaching techniques to the Cougar QB’s. He also drew up plays with the coaching staff.

Orton grew up in Polk County and played high school ball for Southeast Polk, where he finished as the 2nd ranked HS QB in the nation. He then went on to Purdue University, where he was named 1st Team All Big Ten in 2004. Orton was drafted in the 4th round of the 2005 NFL draft by the Chicago Bears.

Wednesday he spoke to the Manson team following their practice. In talking about the Cougars loss in week 1 he said ” Some of the best seasons I was ever a part of, didn’t start the best. That’s why I love football it’s a marathon not a sprint”. The cougars will look to use words as inspiration on Friday when they travel to take on Sioux Central. 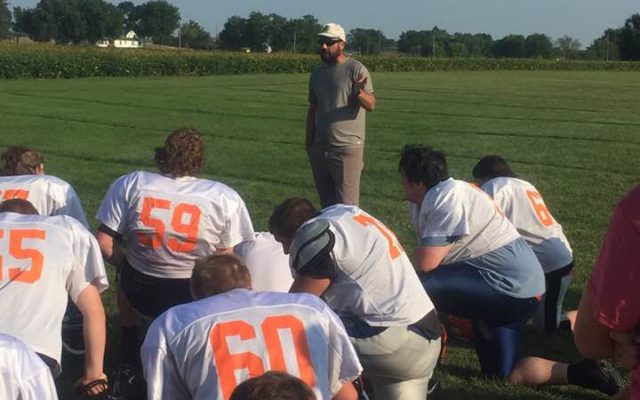