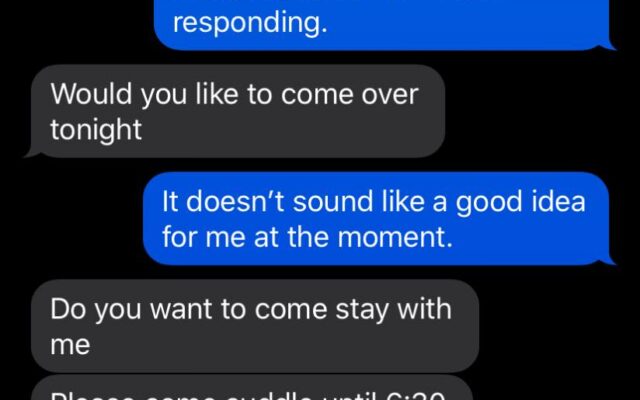 A former Webster County choir teacher will not have to face a jury or his accusers, but will be added to the Iowa Sex Offender Registry after pleading guilty to a charge of Sexual Exploitation of a School Employee.
Brandon Louis, the former choir director at Southeast Valley High School in Gowrie filed the written plea to the lesser of his charges in Webster County District Court on October 27th.
His plea states that quote “During October 2019 through June 2020, while in Webster County, Iowa, I was employed as a teacher at Southeast Valley High School in Gowrie, Iowa. During that time, I exchanged text messages, which were sexual in nature, with a minor student , and with the purpose of arousing my own sexual desires.”
He faces a maximum of two years in prison
Sentencing is set for December 19th.
Louis was arrested in November of 2021 after a yearlong investigation involving search warrants and the interviews of current and former students.
What was supposed to be a safe space for those students to gather turned into a nightmare three years ago for at least a dozen young people as Louis abused his role.
Haley Studyvin was one of those students who had a close relationship with Louis and at first felt comfortable with him as a teacher, but little by little that changed.
“He started reaching out to me later and later at night,” Studyvin said. “The text started as endearing, like you’re going to do great things and it progressed into where by the end of my senior year he was trying to get me to leave my house in the middle of the night and sleep with him.”
Studyvin said it has been a long road and her eyes have been opened to how often this happens and wants to make sure others in her position know that they will be heard.
She says she wants to be a resource to others going through similar situations and wants others to know that they will get through it and be able to heal.
Pictured is a screen shot submitted by Studyvin of one of the conversations she was subjected to by her former teacher when she was under the age of 18.