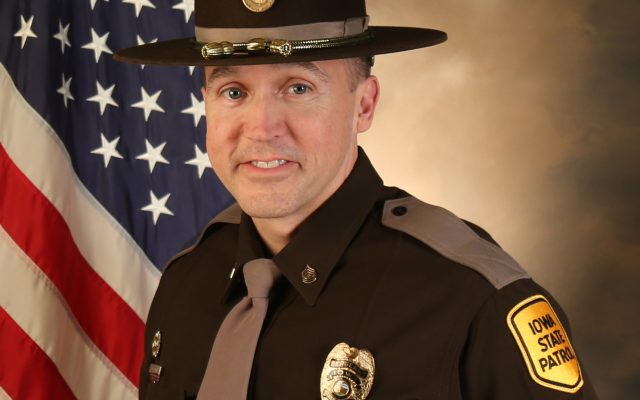 From Radio Iowa- A  27-year veteran of the Iowa State Patrol was shot to death Friday night during an armed stand-off with a man who authorities say had assaulted a policeman earlier that evening. Iowa State Patrol Sergeant Jim Smith was part of a team that entered the Grundy Center home of Michael Lang at about 9 p.m. Friday. Mitch Mortvedt  Assistant Director of the Iowa Division of Criminal Investigation, delivered a briefing on the case Saturday afternoon.

Just before midnight, authorities used an armored vehicle to ram there way into Lang’s house.

(as said) “During the entry, Lang shot several rounds at the personnel carrier and three members of the tactical team returned fire, stricking Lang multiple times,”

Mortvdt says Lang was taken to University of Iowa Hospitals,where he had surgery following gunshot wounds suffered int he incident. As of Saturday Afternoon, Lang was listed in critical condition. Lang has been charged with one count of first degree murder and being held on a one MILLION dollar bond. The chain of events began shortly before 7:30 Friday night when a Grundy Center policeman attempted to make a traffic stop, but Mortvedt says Lang sped away, then stopped in an area southeast of Grundy Center and assaulted the officer.

“During the assault, Lang yelled, ‘Shoot me,’ multiple times to this officer,” Mortvedt says. “Lang disarmed the officer of his Taser, removed his radio and put the officer in a chokehold.”

Mortvedt says a Hardin County deputy who arrived at that scene tried to arrest Lang, but Lang got back in his vehicle and sped back into Grundy Center. The deputy found the vehicle parked outside Lang’s house, saw Lang walking inside and called for back-up.  The death of Sergeant Smith marks the 1st death of an ISP Trooper in the line of duty since 1936.

(The photo of Sergeant Jim Smith is courtesy of dps.Iowa.gov)