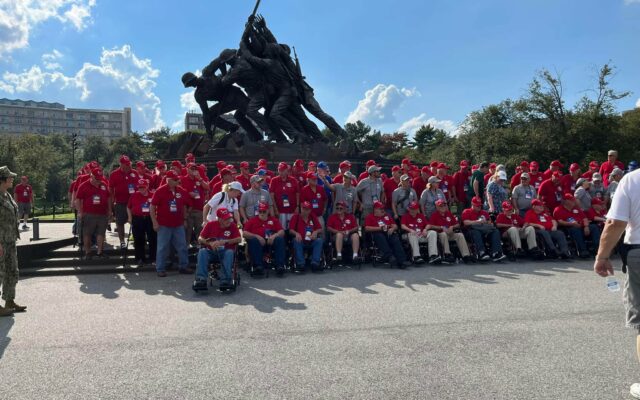 (Alpha Media – Brooke Bickford) It has been decades since the veterans who traveled Saturday to the nation’s capital for the Brushy Creek Honor Flight have battled in wars and have served in our military, but to those waiting at the airport, at the memorials and beyond.. the legacy and their service has not been forgotten.
Salutes, handshakes and thank you for your service could be heard throughout the trip to Washington DC.
For Art Johnson, Frank Francis, Denny Houston and Judge Brown some of the best moments of the trip came from the people of all ages waiting to greet them along their journey.
This was the 21st trip for Charlie Walker, one of the organizers, who had a smile on his face the entire time.
Walker said there is nothing like it and he wants to make sure that each and every veteran has a chance to experience it. “We’re running out and we know there are guys out there that haven’t gone and we want you to apply and come with us,” he said. “We have plenty of room on our May flight and if we have to go past that, we’ll go past that.”
The Honor Flight is open to veterans who served in Vietnam and before and that includes during peacetime.
The trip was one that Rick Merrill had been apprehensive about going on but in 2019 he changed his mind and was set to go in May 2020, when he passed away
His wife Maureen Merrill spoke with Alpha Media News at the final stop on the trip, the Air Force Monument. “My husband was in the Air Force, he passed away before he was able to come on the Honor Flight,” Merrill said. “I’m here today and brought his burial flag.”
The next Brushy Creek Chapter Honor Flight is planned for May and if you haven’t already applied you can by calling or stopping by or calling the Walker Law Office in Fort Dodge, 515-576-0671.

Swedish Meatball Supper at Our Savior's Lutheran Church. September 14, 2022 Carry out available at the west […]

Join the Friends of Webster County Conservation for a fun night of proving your nature knowledge. We […]

In recognition of National Workforce Development Month, IowaWORKS and Iowa Central Community College will be holding an […]

Mark your calendars! Abate of Iowa District 10 is kicking off their Christmas sprit in September! Put […]

The Browns of Le Mar's, Iowa are a nationally renowned group that has performed in Branson, Nashville, […]

The Clarion Cub Scout pack has been inactive since 2019 due to Covid. Under new leadership the […]