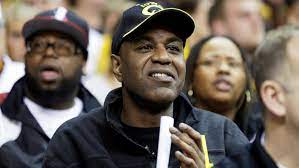 More than 30 years after his college playing career has been over, a former Iowa Basketball star will be enshrined. The school has announced that Roy Marble will be among 10 former athletes inducted into the Hall Of Fame this fall.

Marble held the school’s career scoring record for over 30 years before it was broken by Luka Garza this past season. Marble also led Iowa to the 30 win mark and the NCAA Regional Finals in 1987.

His son Roy Devyn Marble later starred for the Hawks himself. Roy Devyn publicly criticized the Iowa Athletic Dept. when it was announced they would retire Luka Garza’s jersey. At that time, Roy Marble was not in the school’s Hall Of Fame, nor had he had his jersey retired.

At the time Iowa AD Gary Barta responded to the criticism, saying that “Roy Marble doesn’t meet certain criteria to qualify for the Hall Of Fame”. Barta refused to elaborate on what the criteria was.  Barta still has not mentioned publicly what the criteria was, or if that specific criteria has been dropped?

While Roy Marble was certainly qualified for such an honor, many questions remain over what the “mystery” criteria was? Another question, is why now after all these years and not prior to his death in 2015?

Those are question may never be answered? However, I can answer the question of when is Roy Marble being inducted? Friday Sept. 3rd, the night before Iowa Football opens its season with Indiana.