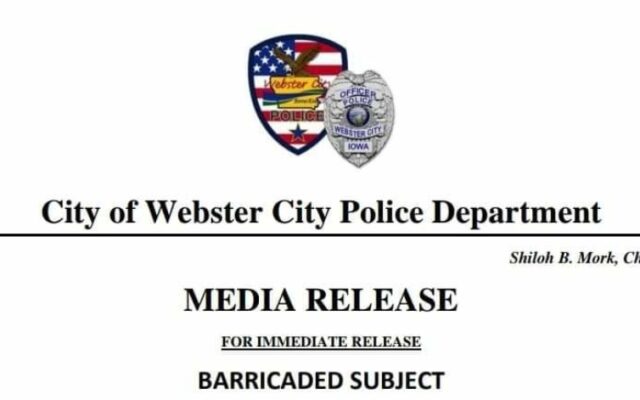 (Alpha Media – Brooke Bickford) The Webster City Police Department arrested a man they were attempting to serve an arrest warrant on tonight after he barricaded himself in a home for nearly 4 hours.
The man, 44 year old Gabriel Aaron Peltz, was wanted on a warrant for violating his condition of release from jail for an original charge of Possession of a Controlled Substance.

He was spotted on the property at 109 Apple Avenue in Webster City at a little after 2:00 pm. When officers approached him he entered a home and refused to come out. A negotiator was called in, but after those efforts were unsuccessful K9 Team from the Iowa State Patrol entered the residence after 6:00 pm and took him in without further incident.
No injuries were reported and he was taken to the Hamilton County Jail.
The incident remains under investigation and further charges are pending.