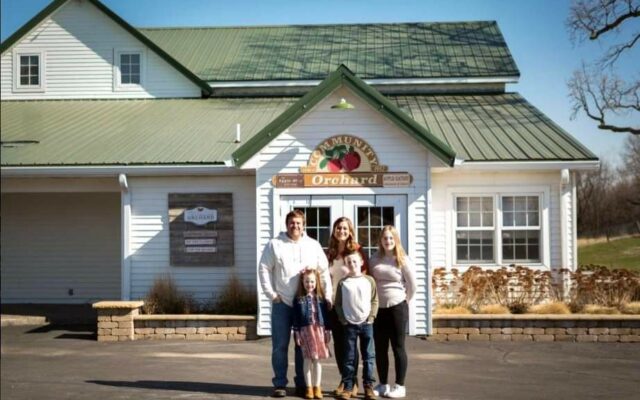 (Alpha Media- Brooke Bickford) The name will stay the same, but there will be a new family at the helm of the Community Orchard in Fort Dodge.

Denny and Emily Stucky announced Monday via Facebook that they will be taking over the business with an opening date of August 1st.

Emily Stucky told Alpha Media News Director Brooke Bickford that she and her husband started talking about this dream in January.
“Our idea became real when we started talking to the bank about getting the loan,” she said. “Then we talked to the Baedke’s and they were thrilled that we wanted to do it, so it just became a reality.”

Emily said the Baedke’s had been wanting to sell it, but were waiting for the right people.
“We’ve both grown up with the Orchard. We’ve always taken our kids out here so to us it just means we are continuing a tradition for our family as well as traditions for the entire community and people even out of town that come here.”

Denny and Emily Stucky along with their three children are lifelong residents of Fort Dodge.
And she says when it comes to making any changes:
“We love everything about it. We aren’t going to change a thing.”