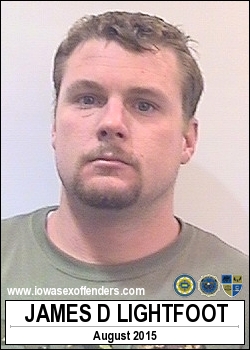 A convicted sex offender has been arrested on warrants from Pocahontas and Buena Vista counties. 35 year old, James Lightfoot of Storm Lake was stopped around 2 AM Wednesday,by the Storm Lake Police Dept.

A K-9 unit was dispatched and a search of the vehicle turned up drug paraphernalia. Officers then discovered that Lightfoot was wanted out on warrants from Pocahontas County. The warrants were for a violation of the sex offender registration and violating a non-contact order.

He also had warrants from Buena Vista County on two counts of violating the sex offender registration and one count of sex offender verification violation. Lightfoot was also charged with drug paraphernalia from the traffic stop.