This Weekend Set To Be Jam Packed With District Wrestling Action 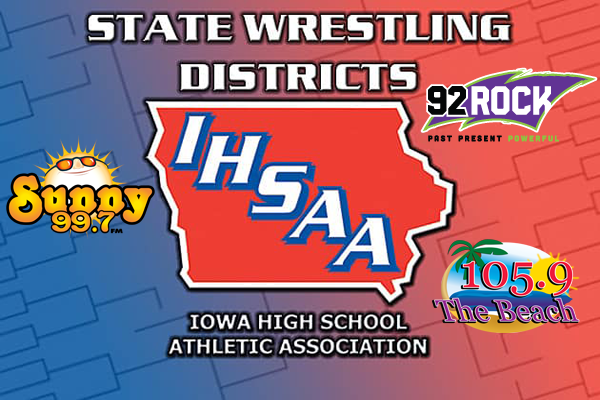 On “92 Rock (92.1)” Fort Dodge is once again hosting the 3A District Tournament. Dodger Wrestlers will look to put their ticket to State. For the 1st time ever, Alpha Media Sports will have live video coverage of the event as well. The video coverage will be available on the Fort Dodge News-Alpha Media and 92 Rock Facebook Pages. Also it will be on any of the Alpha Media Fort Dodge station Facebook pages and a link to the video will be here on our website. KC Meiners and Mike Szalat will have the call and Mike Fraher will have post match interviews with Fort Dodge wrestlers who advance.

On 105-9 “The Beach” ,  Theresa and Tom Hildreth will have coverage of the 1A District Tournament from Guthrie Center. That tournament will feature wrestlers from South Central Calhoun, East Sac County and Ryan Duckett of St. Edmond. The following wrestlers from those school advanced from last week’s sectionals. Below is the wrestler/school and their sectional finish.