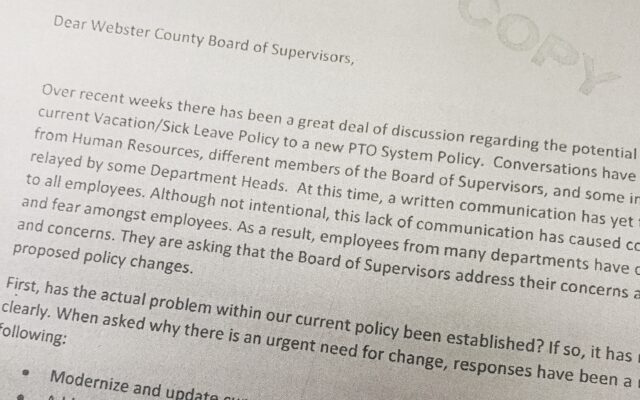 (Alpha Media- Brooke Bickford) The Webster County Board of Supervisors may consider switching to a paid time off system from the current Vacation/Sick Leave Policy for county employees during its meeting on Tuesday, but according to documents shared with Alpha Media News, there is a group of county employees who are not on board with this.

The reasons stated in a five page letter given to the Webster County Board of Supervisors dated March 23rd  and shared with Alpha Media, are from around 35 employees from different county departments.

It states that long-time employees will be forced to forfeit the earned sick time they have accrued at 15% of its value and could cause an unhealthy work environment. So for an employee who has 1,000 hours saved just in case they get sick, they will have to potentially forfeit 850 hours when they are switched to the new plan.

Alpha Media’s sources state that the PTO issue was almost on the board’s agenda a couple of weeks ago, but was pulled after the backlash from county workers over the lack of fairness and communication with the workers.

The letter states, “there are too many holes in the proposal, too many areas that need to be addressed.”

Supervisor Niki Conrad says that “nothing has been decided at this point.” and  “As always, we continue to be available to discuss this with employees.”

The issue may be on the agenda Tuesday or at a future meeting.