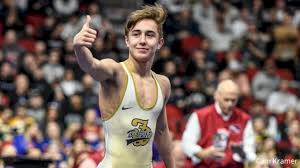 Fort Dodge wrestler Drake Ayala has added another piece of hardware and prestigious honor to cap off his legendary high school career. Ayala has been named National Wrestler Of The Year by the USA Today.

Ayala’s high school career saw him win the State Championship three times, and the Dan Gable award twice. That award is given to Iowa’s most outstanding high school wrestler. Ayala was also the nation’s #1 ranked high school wrestler at 126 pounds, a distinction he carried for quite sometime.

He now heads off to the University Of Iowa, Ayala will go to Iowa City as a highly sought after recruit. He is heralded and will bring with him a high level of expectations, as he comes in as a top 10 overall recruit nationally.