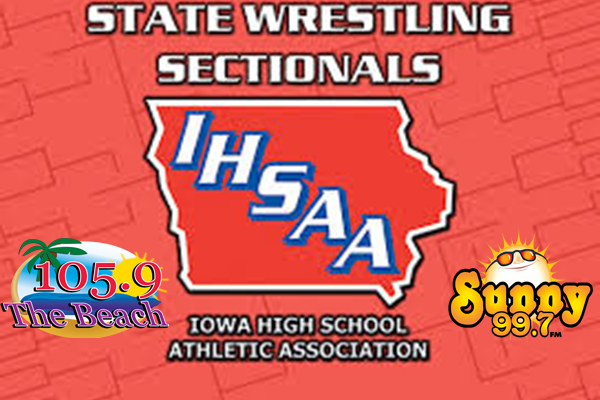 The Class 1A Sectionals led off the postseason for wrestling around North Central Iowa. The Sectionals also jump started the Alpha Media Sports Coverage of postseason wrestling. 105-9 “the Beach” had the 1A Sectionals from Ogden featuring the broadcast tandem of Theresa and Tom Hildreth. South Central Calhoun had a big day in Ogden as they finished first in the team standings and had 7 wrestlers qualify for the District Tournament. The District tournament for those wrestlers is this Saturday at Guthrie Center and will air on 105-9 “The Beach” and here on our website with wrestling starting at noon. The Titans had three wrestlers take gold, Justin Rohlfing at 113, Blake Mcalister at 170, and Jayden Soard at 220. Four Titan wrestlers finish as silver medalists, Jordan Khommanyvong at 132, Kevin king at 145, Zachart Trott at 152, AND Jayden Mashcke AT 160. East Sac County was 2nd as a team, Garret Quirk at 160 and Justin Rupnow at 285 won their weight classes. St. Edmond’s Ryan Duckett finished as silver medalist at 120. All of those wrestlers mentioned above will move on to Saturday’s District Tournament.

On “Sunny” 99.7, the Legore Brothers Carl and Darren had the call of the 1A Sectionals from Manson. At 106 West Hancock’s Evan Boothroyd took gold. Donavon Hanson of West Bend-Mallard won gold at 113 and Eagle Grove’s Kayden Pritchard took 2nd. Kellen Smith of West Hancock took 1st at 120, Pocahontas Area’s Tyce Ruffridge was 2nd. Eagle Grove’s Dustin Dawson took the title at 126. At 132, Pocahontas Area’s Brandon lenz was runner up. Matt Larson of West Hancock took the title at 138. Matt Somerlot of Pocahontas had a 2nd place finish at 145. Kane Zuehl and Bryer Subject of West Hanock took gold at 152 and 160, Ian Kohnen of Manson NW Webster was 2nd at 160. At 170, Creyton Grimm of West Bend Mallra took gold, West Hancock’s Justin Ausborn was 2nd at 182. Alex Weland of Pocahontas your champion at 192, Kale Zuehl of West Hancock was 2nd. At 220, Cole Kelly of West Hancock who also was All-State in football took the title. Dane Johnson of Pocahontas won the gold at 285. All of those wrestlers will move on to this Saturday’s 1A District Tournament at Sioux Central. That Sectional will air Saturday with wrestling beginning at noon on “Sunny” 99.7 and here on our website.