Recent vandalism incidents in a Fort Dodge neighborhood could be signals of increased gang presence. A police report was filed Monday after what appeared to be gang graffiti was found on a building on North 10th St.

When that graffiti was found it was discovered that a house and business that neighbors the property has also suffered vandalism. The letters “GDK” were tagged on the building, in gang language “GDK” stands for Gangster Disciple Killers.

The side of the building at the Liquor and Tobacco Outlet (located at the corner of 1st Ave. North and the 900 block of N. 9th St) was tagged with “900 Block is our block” and tagged with “GDK”.

Last Friday (May 14th) there was a “shots fired” incident in that same neighborhood in which a car was hit by gunfire. That incident was investigated by the Fort Dodge PD and shell casings were collected from the scene.

It is not known at this time, if the the “shots fired” incident is directly related to the gang graffiti. As of Monday morning, personnel at the Liquor and Tobacco Outlet said the vandalism to their building had not been reported. The graffiti incidents happened sometime over the weekend and were discovered on Monday morning.

The Fort Dodge Police Dept. was contacted as to whether the shots fired and the graffiti are directly correlated. They also, were contacted for comment on possible increases in gang presence and activity in the area.

On Monday Afternoon they responded with the statement below:

“As it relates to the gang-related graffiti, we have come across similar vandalism incidents over the years.  However, while we have responded to similar incidents, we do not feel the gang element has increased over the years.  During all investigations we examine elements that could possibly be related to those crimes to include gang activity.  As investigations have unfolded, we have discovered that any gang element to crimes committed in Fort Dodge have been reserved to a very small group of individuals who have claimed some type of affiliation to a gang.  That affiliation has ranged from individuals perceiving themselves to be part of a gang, while others have been identified as confirmed members.

While we have seen this previously, we feel there is no heightened element of gang activity within Fort Dodge from previous years.  The occasions in which possible gang-related vandalism have occurred have been minimal over the years, but do occur.”

(Photo  of the side of the building at Liquor & Tobacco Outlet) 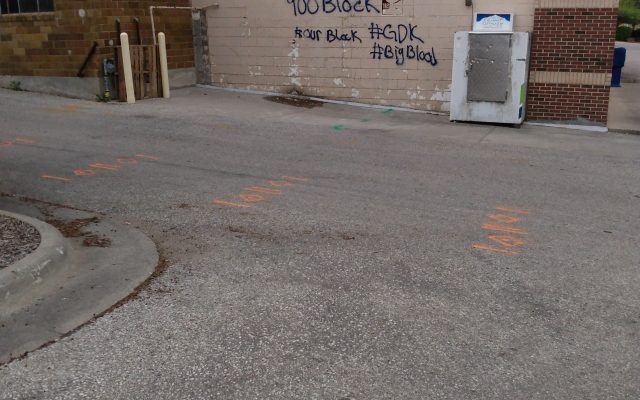 (Photo Below From The Side Of The Building On North 10th St, where the report originated) 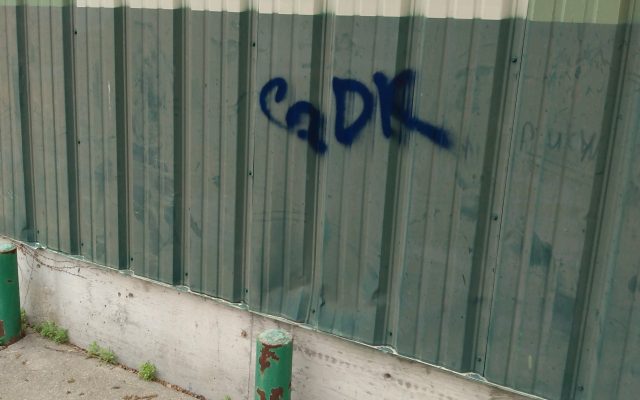