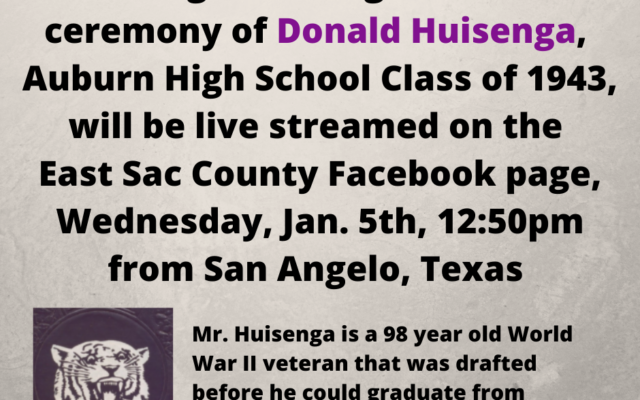 A 98-year-old western Iowa native who says one of his greatest regrets was not getting a high school diploma will be awarded that document Wednesday in a special ceremony. Donald Huisenga (WHOSE-in-gay) didn’t graduate from the former Auburn High School in 1943 because he was drafted to serve in World War Two. Kevin Litterer, principal of East Sac County High School, heard about Huisenga and took quick action.

Huisenga served in the European theatre and parachuted into Normandy in 1944. He also spent six months in a German prisoner of war camp. District administrators decided Huisenga is more than deserving of the diploma, so Litterer is flying to Texas, where Huisenga now lives. They’ll meet this afternoon at the Veterans Affairs Hospital in San Angelo.

“At 1 o’clock, we’re going to meet and he’ll be presented that diploma,” Litterer says. “His grandkids and his children are going to be at the ceremony as well. It’s just going to be an exciting and probably an emotional time as you present a 98-year-old World War II veteran his high school diploma.” Litterer says everybody in the school district is excited for the ceremony and he’ll be bringing some special gifts along.

“We actually have our three buildings, the elementary, middle school and high school are all making ‘Congratulations on your graduation’ cards that I’ll take down with me,” Litterer says. “I got a call from (a woman) representing an organization in Sac County called Quilts for Valor. They’re giving me a quilt that I’m going to take down and present to Donald as well.” The unique graduation ceremony will be livestreamed on the E-S-C Facebook page.