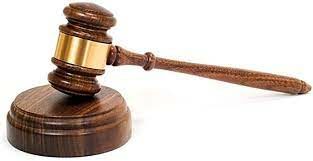 A Fort Dodge attorney has been chosen by Iowa Governor Kim Reynolds as a district court judge in Judicial District 2B.

Associate Judge Derek Johnson was appointed by the Governor on Wednesday.

Both Johnson and Humboldt Attorney Jonathan Beaty were nominated earlier this month to fill the seat left vacant by Judge Gina Badding who was appointed to the Iowa Court of Appeals.

Johnson was appointed as an associate judge to the bench in February of 2020.