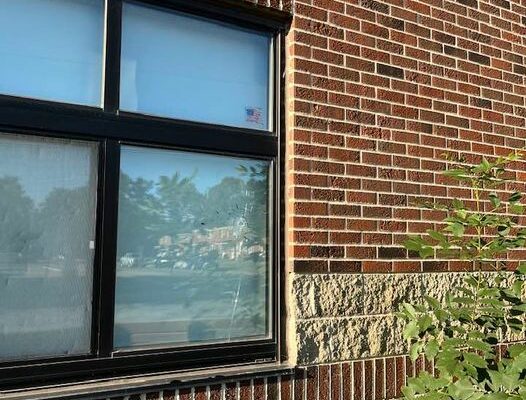 This morning a convoy of law enforcement vehicles lined the street and parking lot of Dodger Town Homes located on North 22nd Street between 6th and 8th Avenue North.

Just about a week ago across the street from the apartments, a bullet hole was discovered in the window of an elementary classroom at St. Edmond Catholic Church

The picture, submitted to Alpha Media, rises to a new level of concern for the safety of people around that area that is becoming plagued with police calls and reported shootings.

“We got an email saying that they had found a gunshot hole in one of the elementary windows,” parent Carlie Messerly said.

Messerly, who has two children attending the school says the email was sent out July 28th by St. Edmond Catholic School President Mary Gibb to parents, law enforcement was called right away after the bullet hole was noticed and security cameras are being reviewed,

Reported shootings and criminal activity have been occurring in the neighborhood surrounding Dodger Townhomes. The apartment complex is across the street from St. Edmond, next to a nursing home and a half block away from the Fort Dodge Senior High School.

As school is getting closer to beginning, many parents are concerned about the dangers in relation to the activity there and how a stray bullet could come so close to a place that is supposed to be so safe.

Messerly saids she isn’t concerned about the school, only what is happening across the street:

“I trust St. Edmond Schools wholeheartedly,” she said. “They have our children’s best interest at heart at all times. They are very responsive with anything surrounding them and their safety. The thing that scares me the most is more of the fact of the ownership of the complex not having those same interests at heart.”

According to the Webster County Assessor, the units are owned by Becker Realty Investments LLC.