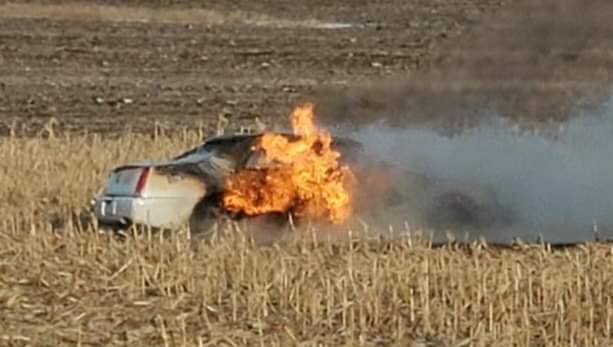 (Alpha Media – Brooke Bickford)
An update on a story Alpha Media first brought to you yesterday on a high speed chase that crossed Webster County into Calhoun County and at one time even had a pursuit through a cornfield.
According to Iowa State Patrol Trooper Paul Gardner, Archester Rodgers of Minnesota was arrested and charged after that chase that began after police clocked him driving at 95 miles per hour on Highway 20 east.
“The traffic stop was attempted and the driver made a Uturn to proceed back westbound on highway 20. At that point the chase was on,” Gardner said. “A trooper at one time used a pit maneuver to end the pursuit that directed the vehicle into the ditch. He was still somewhat mobile, but then when he tried to drive through a cornfield, that’s when his car started on fire and became fully engulfed.”
Trooper Gardner said Rodgers is being held in the Webster County jail on active warrants out of Minnesota. He did not have an active driver’s license.
For the high speed chase, Rodgers was charged with eluding, possession of controlled substance and some traffic charges related to the pursuit.
Webster County Sheriff, Calhoun County Sheriff, Sac County Sheriff Rockwell City Police Department, Lytton Fire Department all assisted in the incident and no law enforcement personnel were hurt during the pursuit.